HB-HOT, the aircraft involved in the accident.

The “Safety Culture” of any aviation organization, can either make or break that organization. That proved to be the case with JU-Air of Switzerland. The Final Report, No. 2370 compiled by the Swiss Transportation, Safety Investigation Board, STSB, describes the accident of  JU-Air, August 2, 2018 which occurred 1.2 nm SW of Piz Segnas, Flims, Switzerland. This 78-page accident report, with added appendixes, makes for a very interesting reading. The report is one of the most comprehensive reports I have seen in recent years. It provides a very detailed look at all the negative aspects of human behaviour that lead to the loss of 17 tourists, and the three-person crew, which was on a scenic flight through the Swiss Alps. The LOC or loss of control accident was, as are most accidents, completely preventable.

I have found the SHELL model of accident causal factors, very useful over the many years that I have been promoting aviation safety. I will utilize that jigsaw puzzle model, which was introduced by Edwards and Hawkins back in the 1970s, as we examine a number of the factors that when combined together, lead to the fatal accident. Do all the pieces of the puzzle fit together with the L or liveware (pilot) in the center or not?

Swiss investigators identified numerous issues with regard to maintenance:

JU-Air’s maintenance program “lacked essential information on topics such as partial and major overhauls of the airframe, surface protection, and supplementary inspection documentation. In general, it was difficult to trace the maintenance work performed as well as the modifications and repairs made, because the maintenance documentation was flawed, incomplete or kept in an unsystematic manner.”

The empty weight of the aircraft, and the center of gravity values, were incorrect in the operations manual, therefore pilots had been systematically miscalculating these figures, including on the day of the accident flight. The aircraft was loaded, slightly aft of its rearward limit, making it more difficult to control in the event of a stall.

The risks of VFR flight or mountain flying were never assessed, despite the existence of an approved SMS ( Safety Management System). The fact that mountain flying was completely ignored was a major indicator of a  dysfunctional system of risk assessment, as almost all the flying was over mountainous terrain. Investigation of the JU-Air revealed that the routes and altitudes selected by JU-Air left no margin for error. Aircraft were routinely flown down the center of valleys, it was common to cross mountain ridges at more than 45 degrees and at altitudes that did not provide any escape route, should the aircraft encounter wind shear or down flowing air.

The routes and altitudes flown by JU-Air were not only unsafe but also illegal. The JU-52 was required to remain at least 2,000 feet above any terrain within 9.3 km of its route of flight, because the aircraft could not maintain level flight above 8,200 feet, in the event of an engine failure. Pilots flying the route would not be able to follow the 2,000 feet above terrain, as that would involve flight at 12,500 feet. There was another air regulation stating the aircraft could not fly over 12,500 feet, as the airplane was non-pressurized. Basically the JU-52 was not the right aircraft for the mission. The terrain clearance distances were not mentioned in the JU-Air operations manual. One wonders how the Swiss authority would ever approve a document with those major shortcomings.

Investigators discovered that there were 150 safety-related incidents that had occurred prior to the accident, and there was no in-depth analysis performed of any of them. Risky behaviour was commonplace at JU-Air and the operation was being managed without any regard to operational risk. Safety regulatory over-sight had been systematically deficient.

The risks of VFR flight or mountain flying had never been assessed, despite the existence of an approved SMS. 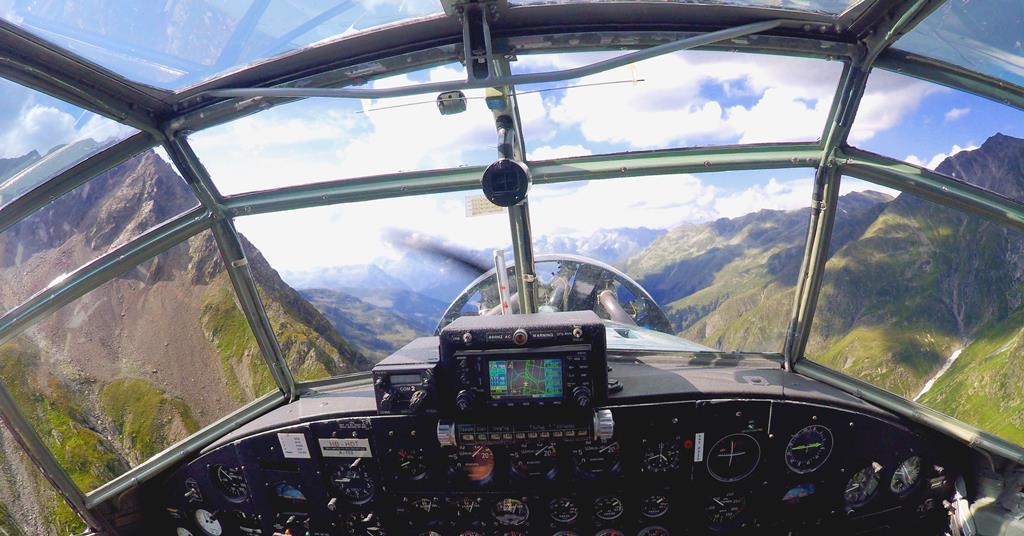 View from the cockpit of accident aircraft (Note: Regulations required a/c to be 2,000 ft above the terrain)

Hardware – the aircraft, engines, and instruments

The Junkers Ju52 a low wing trimotor was designed in 1931 and entered service with Lufthansa, the German civil airline, in 1932. The BMW-powered aircraft could carry up to 18 passengers. Approximately 6,000 units were ordered by the Luftwaffe and saw service in WW2 as bombers and military air transports.

At the time of the accident in 2018, the aircraft was then an antique, having been built in 1939. It was powered by three nine-cylinder radial engines, turning fixed pitch propellers.

The Swiss Transportation Safety Investigation Board identified the following issues with the aircraft:

“Numerous engine faults on JU-Air aircraft were recorded between 2008 and the accident. The investigation revealed that 17 safety-related engine malfunctions or system faults in relation to an engine took place during flight. On each of these occasions, it was necessary to shut down an engine or run it on reduced power. In 14 out of 17 instances the flight was aborted. On one occasion, an engine failed completely. Several cases of pronounced vibrations caused by loose propeller blades occurred on flights between 2012 and 2018.

The Junkers Company had long since disappeared years before the accident, and as result, no one held a type certificate. JU-Air had been making the required spare parts through subcontractors, and not all were qualified to produce parts. None of the spare parts received approval from the Swiss FAA.

Liveware – the pilot in command, the person who has to put everything together

Photo taken by a passenger just as the airplane stalls, and yaws to the left. The red arrow indicates the landmark being pointed out to the passengers.

Liveware  (others) – other individuals who are interacting with the pilot

The wreckage of HB-HOT lies in a valley in the Swiss Alps after the crash.

The most hazardous item in the cockpit continues to be… the pilot.

… can be accidents waiting to happen, and far too often take trusting and unwitting passengers on their final flight. The accident pilots would appear to have demonstrated  4 out of the 5 hazardous attitudes.

Any aviation organization must have effective oversight into how their personnel are performing, or they will discover their weak areas by “accident”.

Government agencies tasked with monitoring aviation safety have to do their job, they need to “trust and verify”

There are no new accidents, just new victims.

The number of flying hours a pilot has logged may well be a good indicator of future performance, but it is the next hour of flying that is really important.

We used to have a saying at Systems Safety, Transport Canada, and it is still valid today,

“ If  you think flight safety is expensive, try having an accident”

As Captain A.G. Lamplugh, a British pilot from the early days of aviation said “Aviation itself is not inherently dangerous. But to an even greater degree than the sea, it is terribly unforgiving of any carelessness, incapacity, or neglect.”