The Abbotsford Flying Club (AFC) is hosting Fly-In participants at this year’s Airshow.
The show has been branded as ‘SkyDrive’, and for most attendees, it is a drive-in event.
The fly-in option, for General Aviation attendees, is essentially the same as drive-in: bring your own food and drinks and stay with your aircraft for the entire show.

Our aircraft parking area will be on the grass, at the north end of taxiway Alpha.
While not frontline, it does offer a unique and enjoyable show perspective.

Tickets must be purchased in advance from the Airshow ticket website using a coupon code “FLYIN21”.  There will be no facility for payment on arrival.

Please use the contacts below to get more information:

Portable washrooms will be provided.
There will be no other facilities.

AFC is providing off-field camping for aviation guests on the grass around the AFC’s clubhouse.  Pilots seeking overnight camping should contact us directly.  This area will also be used by club members, guests and volunteers.

After 17 months of hibernation the AFC clambered out of its cave for a very well attended flight to Victoria. We had 7 planes participating. Both club planes, Clark’s Cherokee, Dan’s Sonex, Bevan’s RV7A, Devin in the Kitfox and Kevin in his Glastar. The weather was CAVOK.  The Victoria terminal controller was very busy, talking on both the inner and outer frequencies. No opportunity for in cockpit intercom chatter. We were given 500 ft incremental descent clearances and sometimes vectors. For me this was the busiest ever flight into Victoria. Having a two person crew was very helpful. Nobody got yelled at. We walked to Mary’s Blue Moon Cafe for outside seating. We learned that long-time waiter Daniel had retired.

The return flight to CYXX was uneventful. Job well done by everyone. Looking forward to the next flyout to Powell River. Gather at the clubhouse at 0830 hrs.

Regrettably, BC Coast 99s Poker Run is postponed until September or October 2020. They are staying hopeful! Further information will be sent in late summer 2020.

On November 3rd Adrian was the passenger in Bevan’s RV7A. We took off from Chilliwack airport and 5 minutes later we were orbiting the top of Mt Cheam.

On November 3rd Adrian was the passenger in Bevan’s RV7A. We took off from Chilliwack airport and 5 minutes later we were orbiting the top of Mt Cheam. That’s performance!

This weekend we took part in a joint fly-out with the Elphinstone Areo Club located in Sechelt. There was 9 of us consisting of Ken and Devin Campbell, Roberto Fehr, Laurens Bosman, Colin McDonald, Bob and Val Leroux, Lise Ash and George Aun Thin. We met at the flying club at 8:00am and were wheels up shortly after 9am with the slowest of the 3 planes getting a head start. The first squadron consisted of Ken and Devin’s Kitfox, AFC’s GGMA and Bob Leroux’s Piper Arrow. Even though the Kitfox had a head start it was the last to arrive (But we are used to that).

We arrived in Sechelt at the Elphinstone Clubhouse to be greeted by about 10 of their members with coffee, cookies and apples that appeared to be freshly picked. After the meet and greet we jumped back into our planes and were joined by another 3 planes (2 C172’s and a Fleet Canuck) from the Elphinstone club and headed to Texada Island. A special thank you needs to go out to George for helping fly The Sechelt club’s 172 to Gillies Bay and Back. The Elphinstone club needed our help when their pilot found out his medical expired the day before and asked if we could help out with the flying.

Once at Gillies bay we talked to the airport caretaker and found out some info about the airport. The walk down to the beach for those who are interested is easy to find. once you leave the gate at the terminal walk up the road to the telephone poles and at the end of the road is the trail down to the beach. the town site is a 30 minute walk from the airport (rumor is that it is an easy walk down but a good hike back up). There are also some bikes that can be used, you just need to talk to the caretaker to have them unlocked.

Deciding it was too much of a walk in the time we had, Steve from the Elphinstone club talked to one of the local pilots that he knew at the airport. ‘Doby’ Dobrostanski, one of the local pilots, came and let us into the mini museum that he and a couple of members of the flying community had set-up. He also talked to us about the Aerospace camp they put on at Gillies Bay airport every July.

An hour later we were heading back to Sechelt for a BBQ lunch. Once there, the members who stayed behind mad up a nice spread of hamburgers, hotdogs, salads, chips and cookies. While eating lunch we were joined by Chris Hibert and Murray and Le-ann Webb in Chris’s Balanca (if we had signs the landing would have received 10’s all around). After much chatting and eating, and a big thank you from both clubs, we got back into our planes and returned to Abbotsford. We touched down after a good long day at around 16:00.

Below are some pictures.  Click here for the full gallery.

Weather cooperated for a successful Wings & Wheels event at the club on Saturday May 26.  Thanks to all the volunteers and participants whose efforts were greatly appreciated.

Come out and see the show on May 26th.  Contact Ed Boon or Ruth Wiebe if you’re interested in helping out. 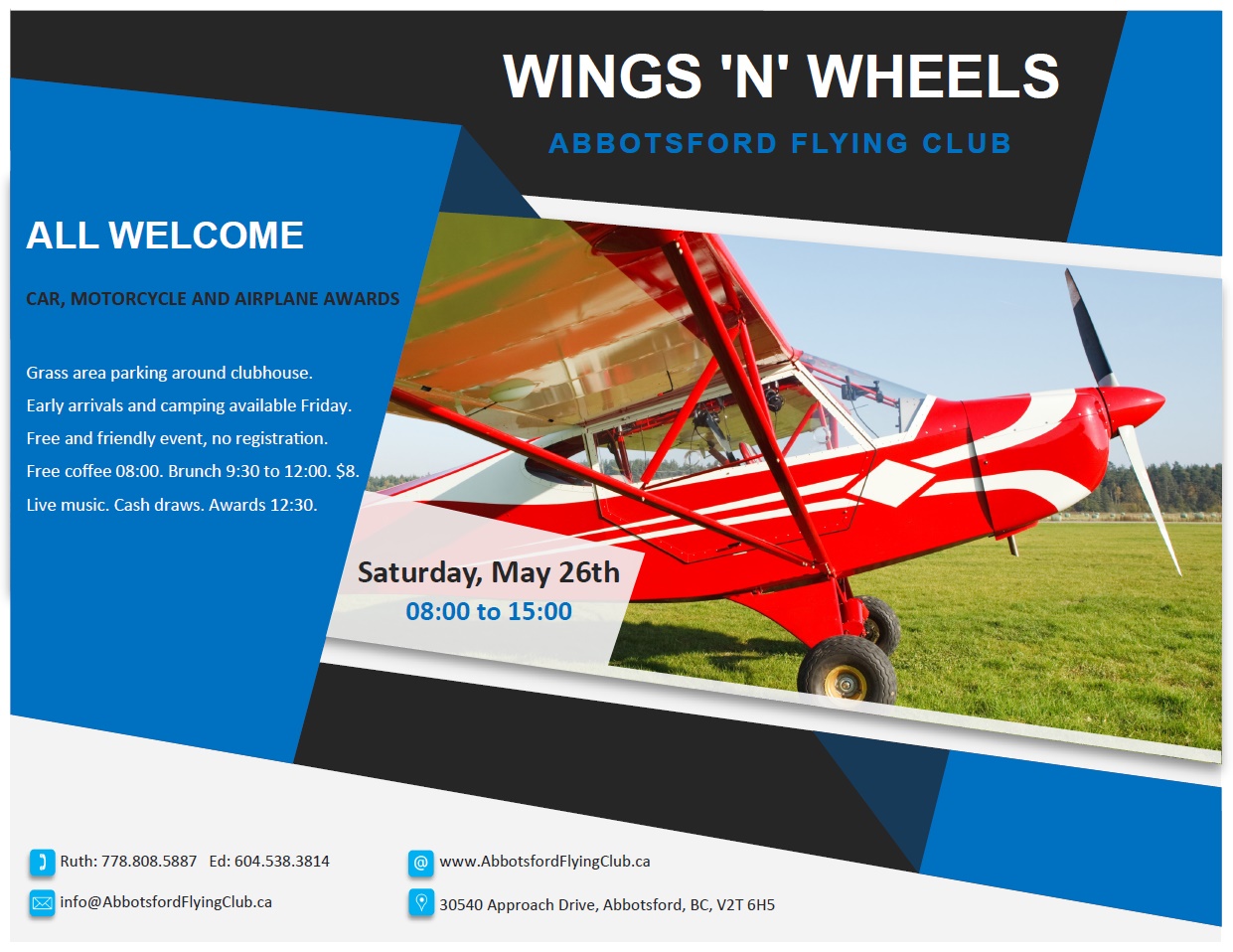 Some good photos from our Wings & Wheels show on May 27.  Click here or on the picture below to access the photo album.

Thanks to Robert Fehr for the contribution!

Steve Stewart and I flew out to YCW on Sunday, April 9th in GMA.  At the recommendation from our president, Ken Campbell, we had an awesome breakfast at Characters Pub and resturant.

It’s only a 10-min walk from the terminal (8559 Young Rd, Chilliwack) and has excellent food, generous portions, great prices and good service. They’re open at 9am on weekends and share the same space with Jimmy J’s restaurant.  You can sit in either one and there’s lots of room.

It’s nice to have a good option for breakfast near YCW.