I’d like to take this opportunity to express my gratitude to you – this year our Wings and Wheels event went off quite well!  Despite the rain and the fact that the “Fly-In” was more of a “Taxi-In” your high spirits, welcoming hearts and “can-do” attitudes turned it into a fun, cozy and smooth-running event!  We provided a safe and secure place for the wings and the wheels, a hearty breakfast for fifty three guests and some enchanting entertainment.

There are just too many people to mention – and I’m terrible at remembering, so please forgive any of my memory lapses.  Firstly, I’d like to express a special thank you to Ed Boon.  Despite wanting to hand off the Wings and Wheels event two years ago, he’s put in a great effort and made things work.  We had lots of great help from Ruth, Steve, Mark and Lorenzo on the preparation and setup in the weeks leading up to the event.  Holes were filled, fences erected, stages set up, critical equipment secured – not to mention the planning, marketing and other thinking that went into the endeavor.  On the day before Wings and Wheels there was a huge set up effort.  During the event itself, one of my secret activities (while the eggs are cooking away) is to step back and observe the hum of activity that goes on while we’re hosting an event.  It’s spectacular!  I saw Murray, Jan, Barb and Val buzzing away in the kitchen and the dining area.  Clark was handing out sausages with Val helping.  Murray presided over the settings, making sure that condiments, juices and syrup kept flowing.  Meanwhile, in the kitchens, Bob ran the cooking operation with an eagle eye and a ready laugh to keep people encouraged.  Bob Leroux and Adrian were everywhere, snapping photos and documenting the action!  The hardcore troopers, Aug and Kevin were out on the field directing the vehicles and aircraft into position – it was cold and wet work on this rainy May day!  Inside, Dirk and his wife Susan took money, sold tickets and kept a tally on incoming customers.  I heard many positive comments from the Mayor and his graceful wife, Velma about the caliber of our club – in particular it’s members; they said we represent the spirit of welcome and adventure that embodies the Abbotsford Community.

Pictures of the event can bee seen on the AFC Facebook page here.

Overall it was a great day – and it was thanks to the skill, dedication and hard work put on by our volunteers.  Thanks to you all!

The  New Year’s dinner party that was organised by Clark Closkey was an overwhelming success.

The table centrepieces were made by Jeanette Campbell. We had real table cloths, courtesy of Leanne and Murray Webb.

44 steaks were served with salads, onions and more than 20 pounds of Jill Greystone’s mushrooms. There was also a great selection of desserts to choose from.

The dress code turned out to be an exercise in elegance. It looked more like a captain’s dinner on a cruise ship instead of a club function. Well done ladies and gentlemen.

Adrian did a head count at 1030 pm and out of 44 people, 42 were still there. It appeared that everyone had doubled up on their Geritol.

Everyone get into the picture! Devin, Vanessa, Sophia and Liam

Valerie at the mushroom station

We had nine aircraft participate in our awesome fleet which included the new addition of a turbine helicopter (thanks Ryan!) which added some new interest to the event.

Thanks to all the volunteers and pilots who participated.  We had a good mix of newer members, “not-so-new” members and some “potential-new” members too.  It’s your efforts and generosity that allowed over 140 kids to get their first taste of flight in a small airplane.  To date, the club has flown well over 1000 kids in the last 10 years!  Well done!

Below in the article is a small sample of the awesome pictures taken by our photographer.  Here are links to the entire collection:  Children  ,  Candids.

We look forward to seeing everyone again for next year’s event on Saturday June 15, 2019 ! 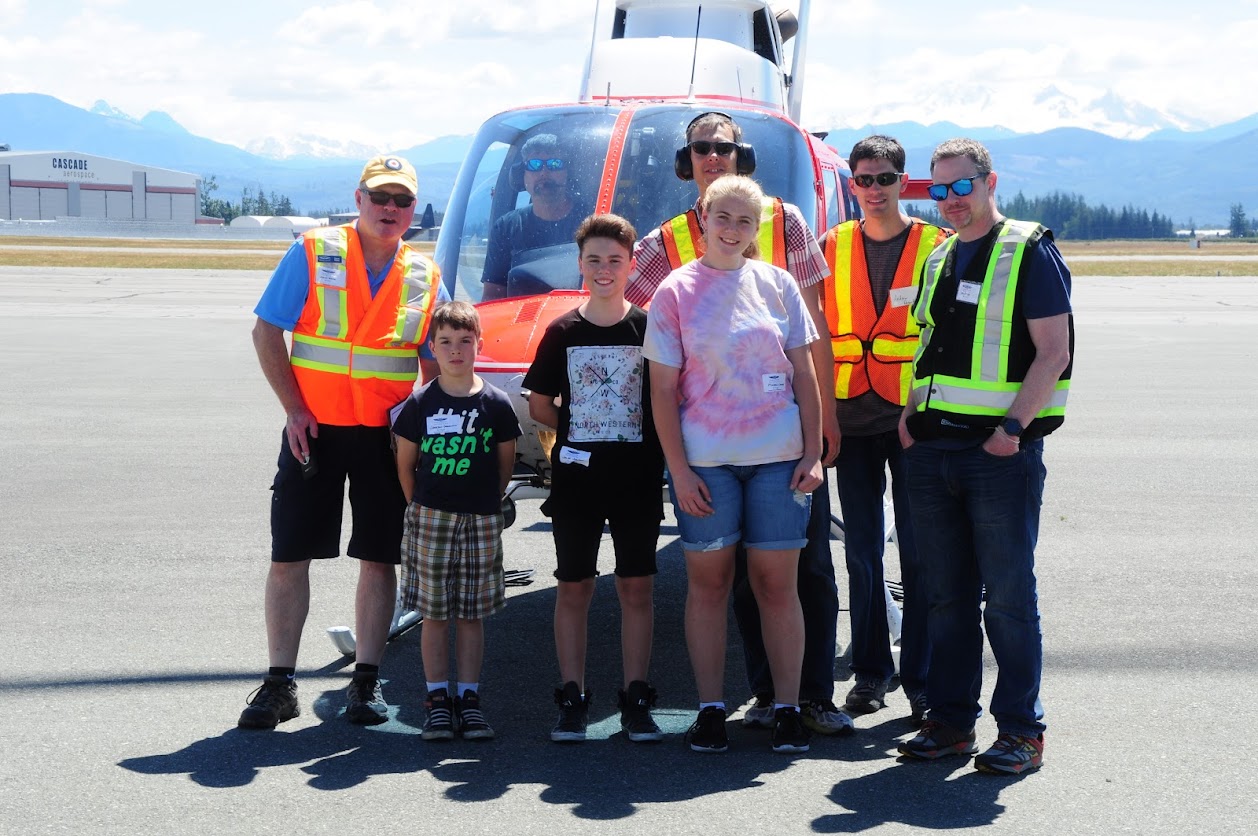 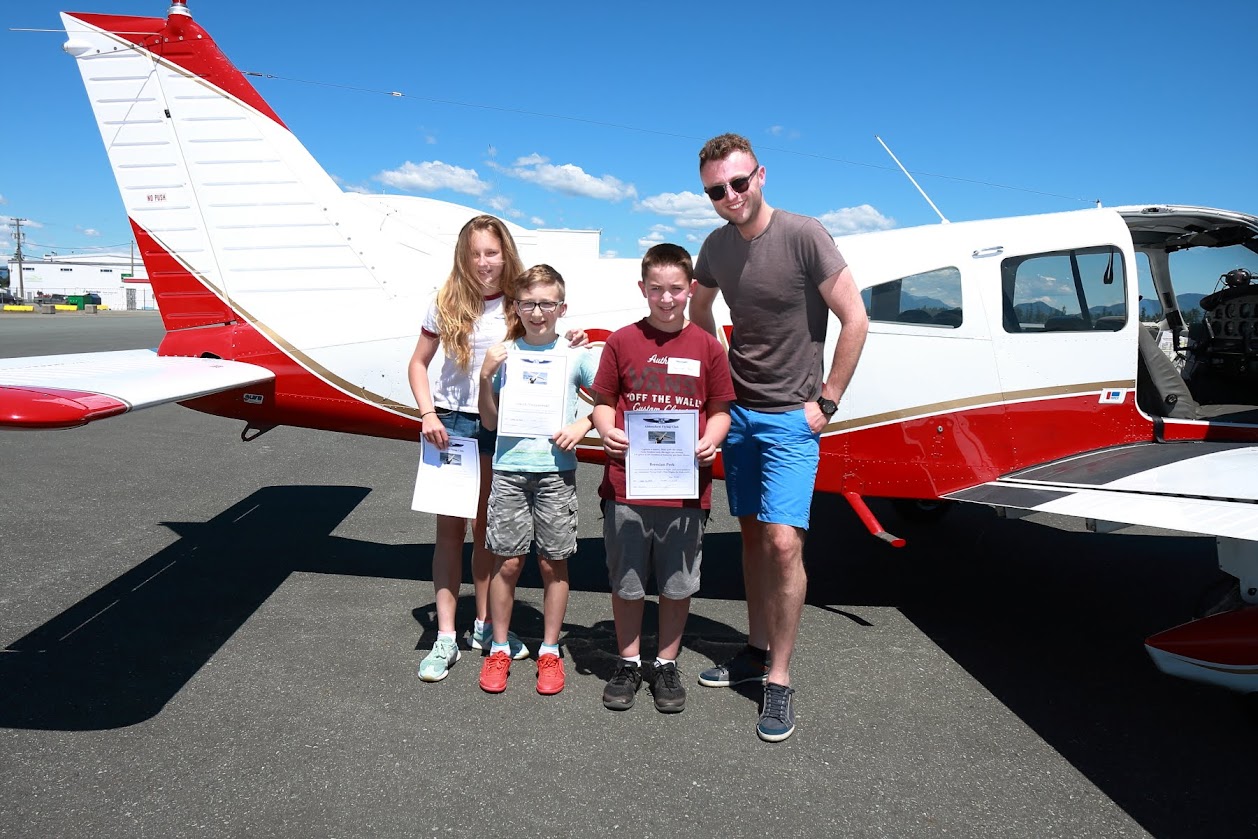 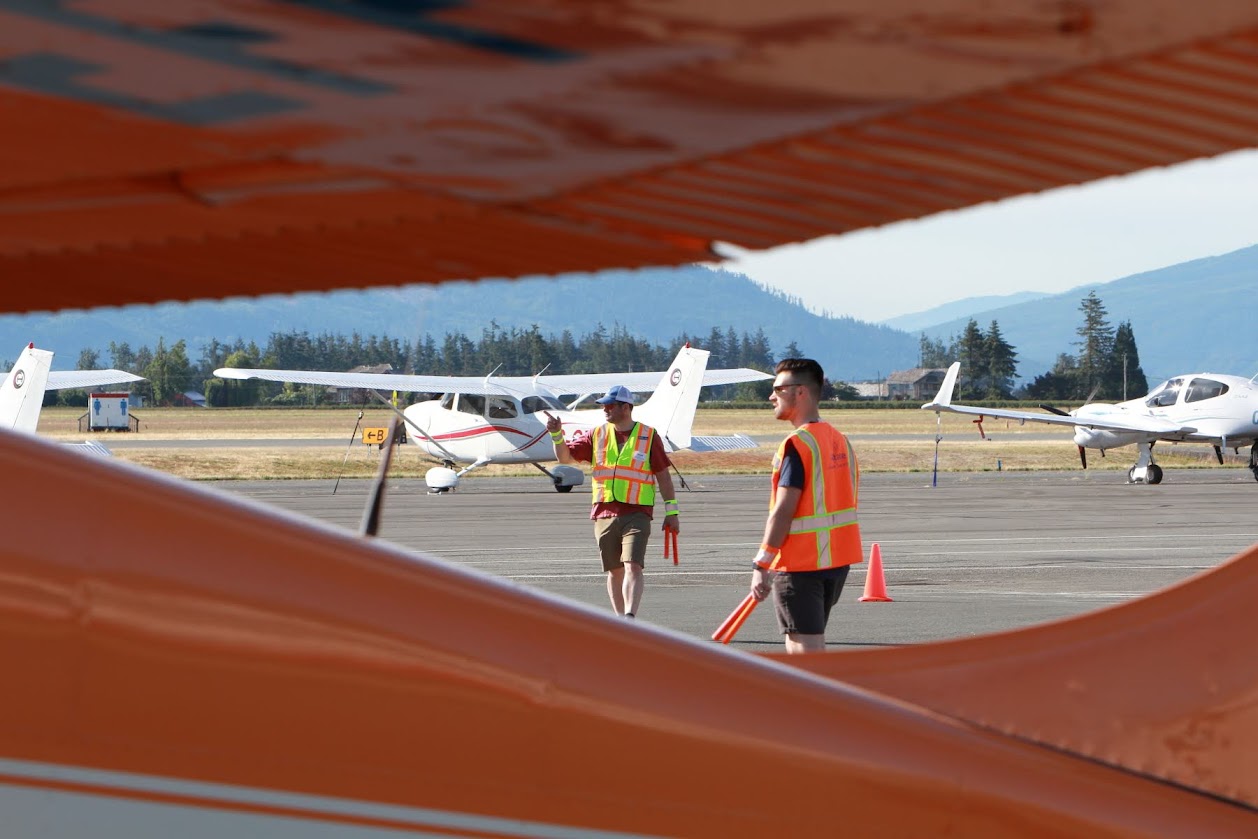 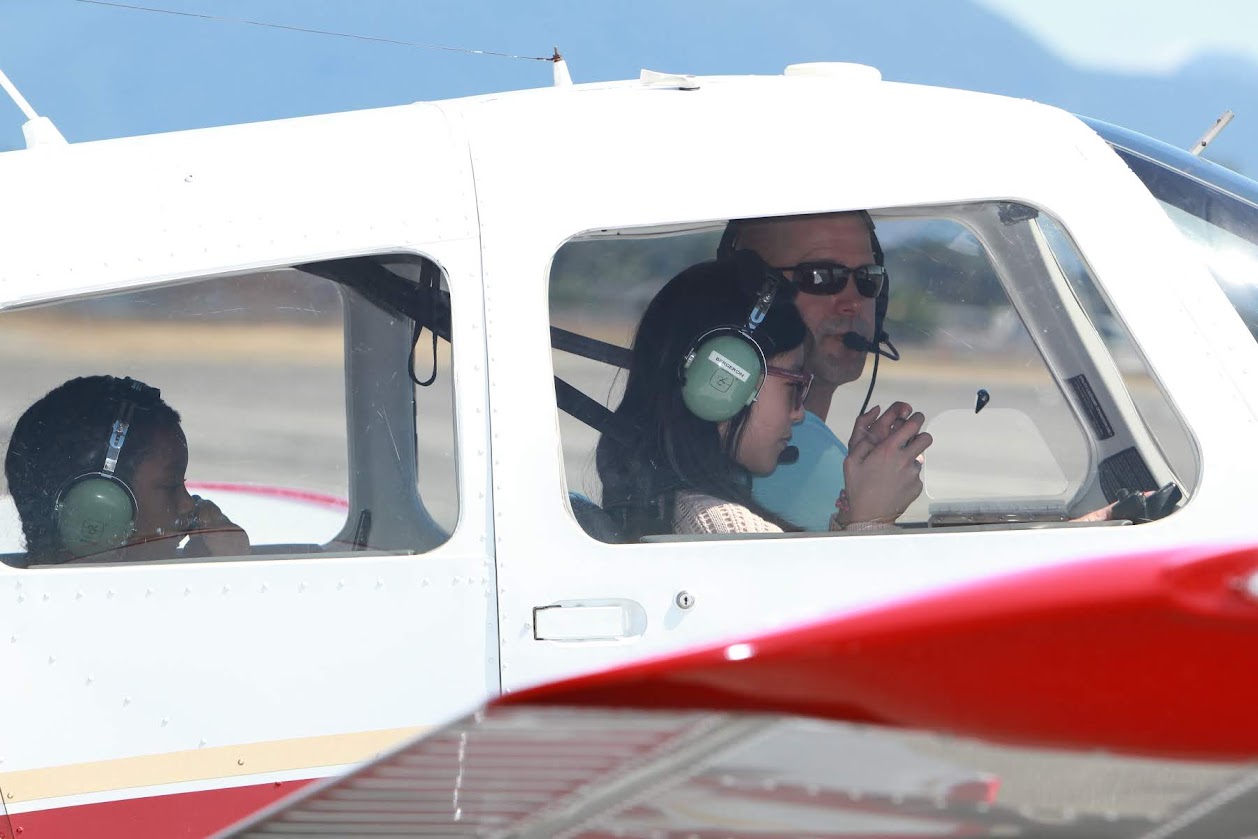 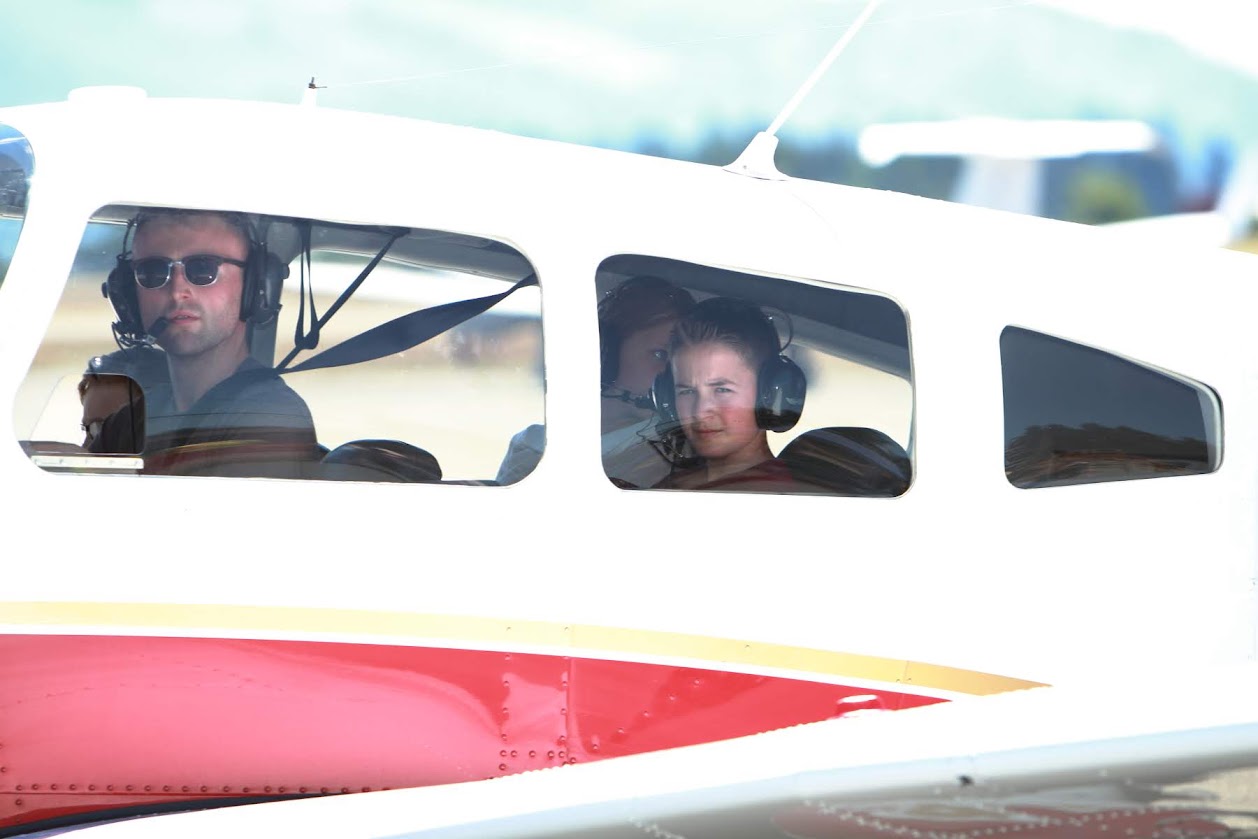 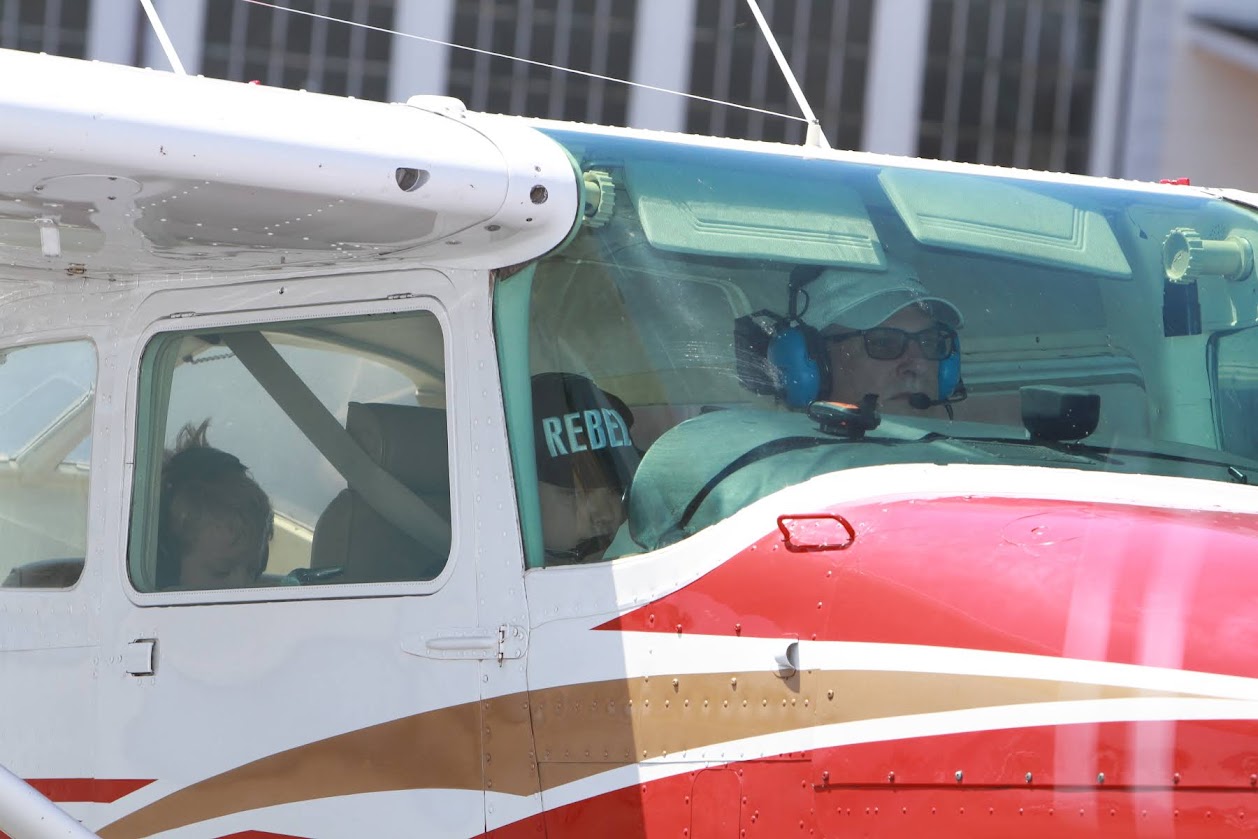 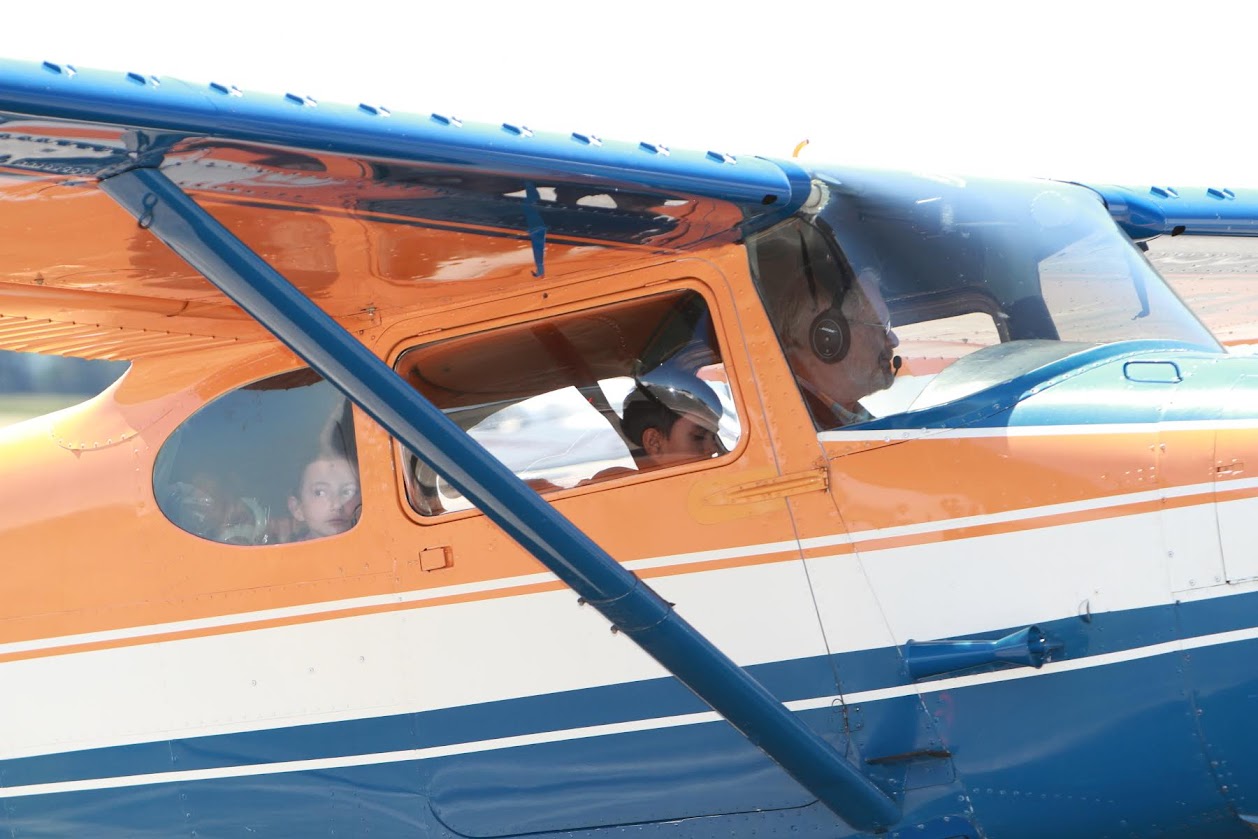 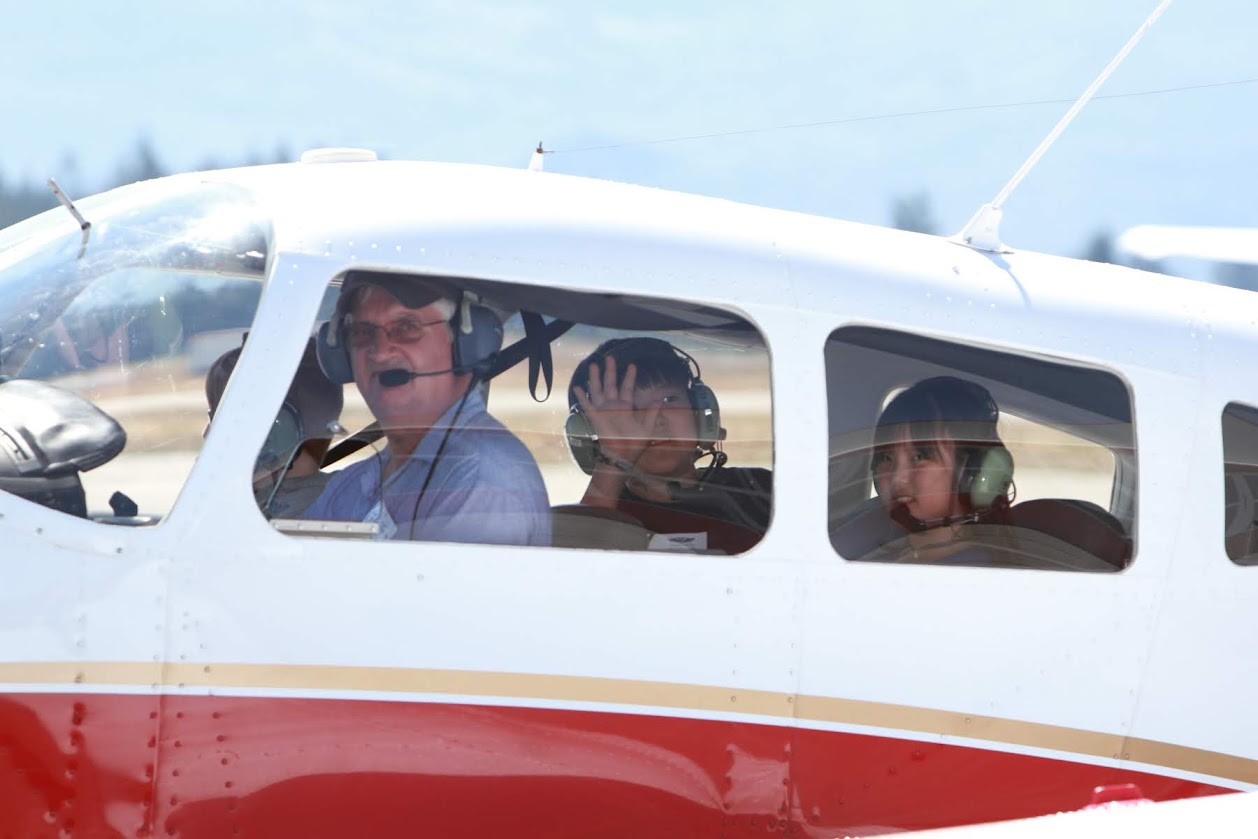 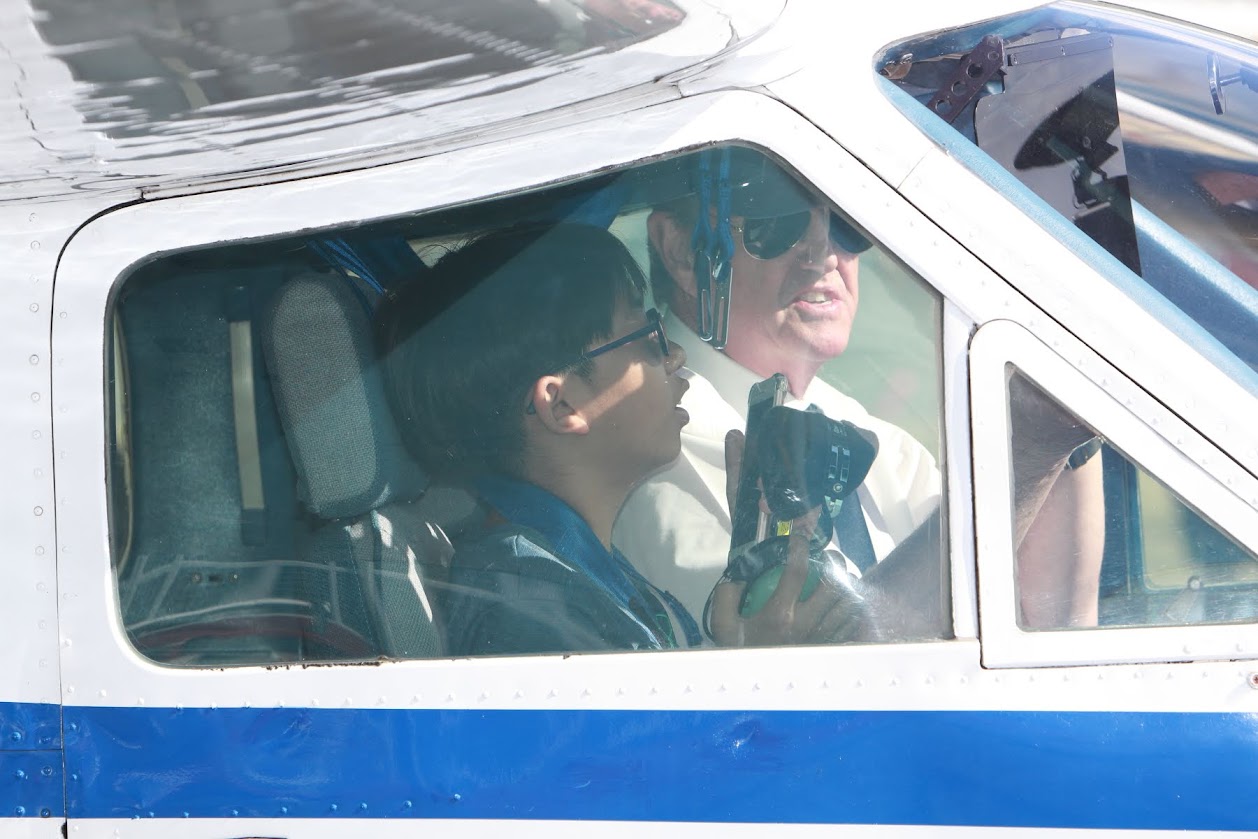 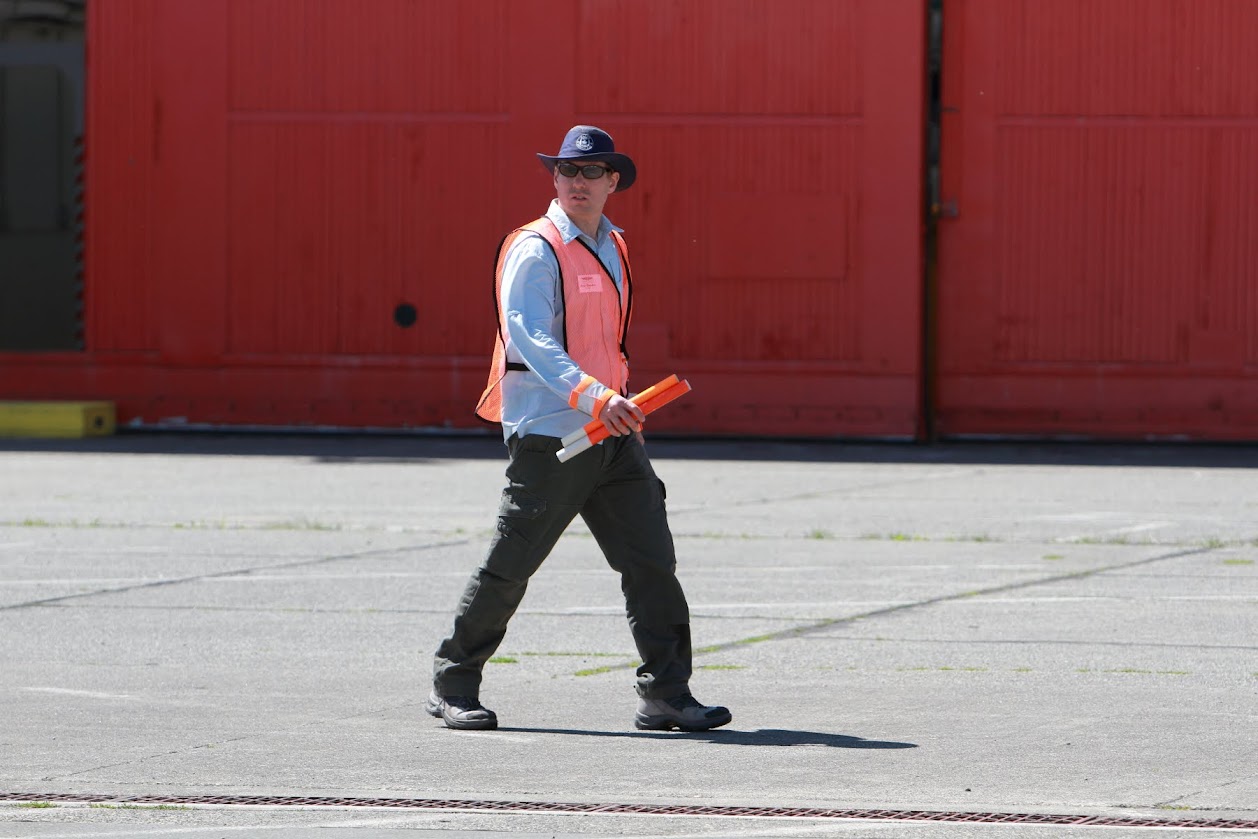 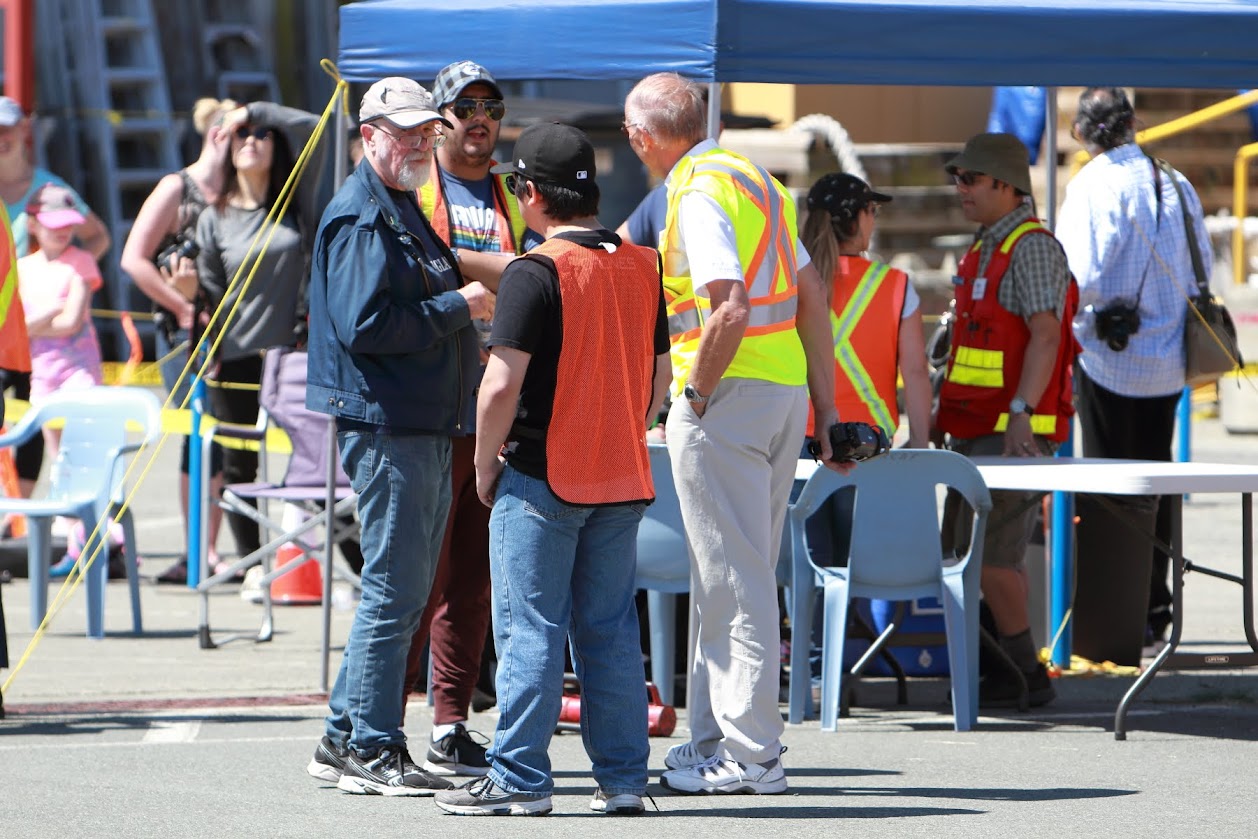 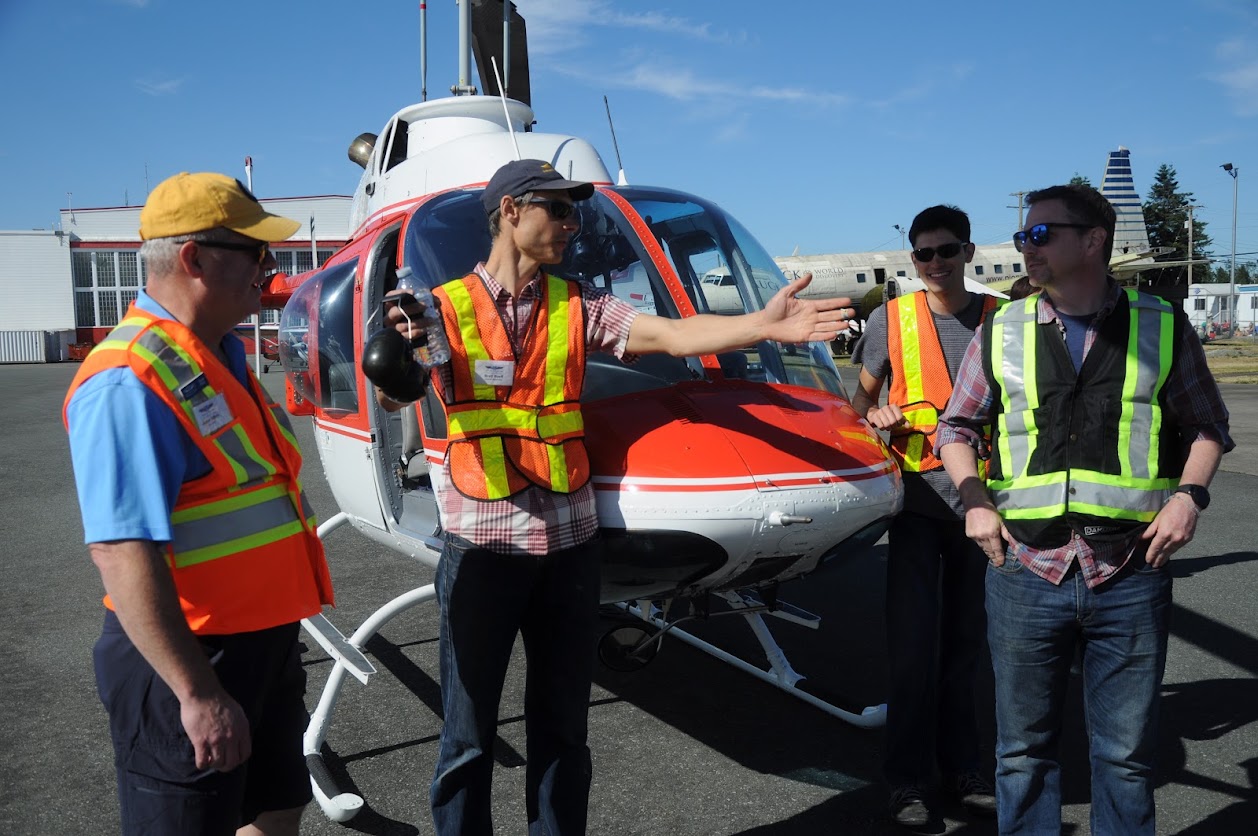 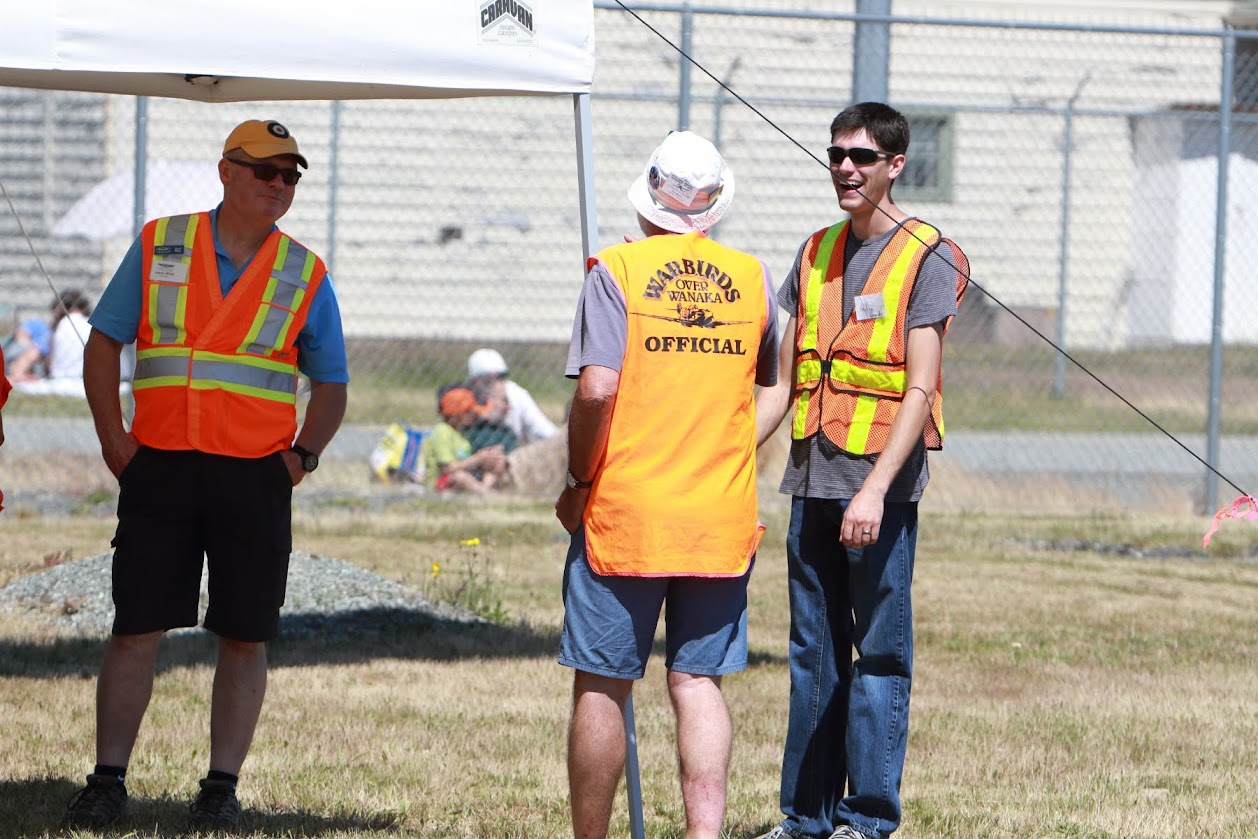 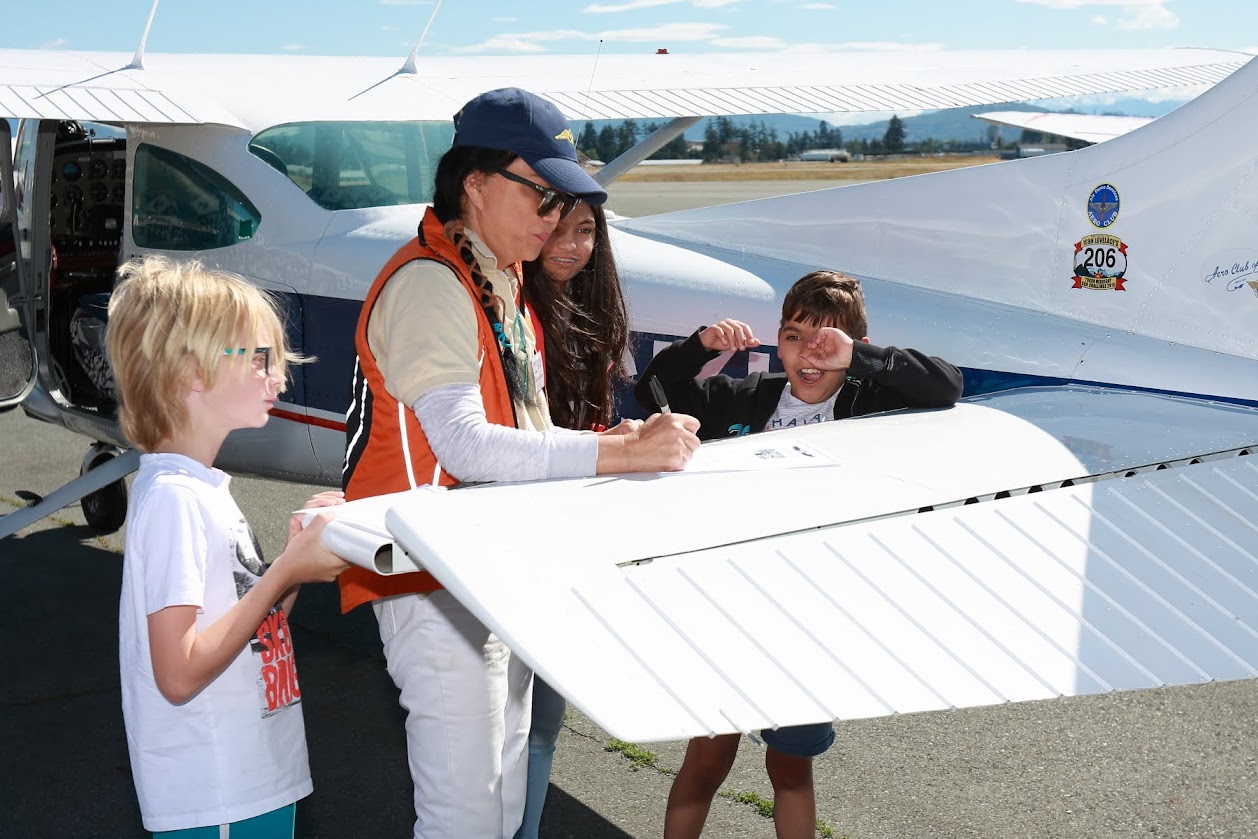 This year’s AFC’s First Flights for Kids event was held on Saturday June 17.  Our club gave 119 kids their first taste of flight in a small airplane.  The weather was excellent and everything went well.

In addition to our awesome pilots and volunteers, our partners, Coastal Pacific Aviation, Conair, 861 Silverfox Air Cadet Squadron and NavCan tower staff all contributed to the event’s success.  Thanks to everyone!

Next year will be our 10th year and we will be looking once again for club members to come together to provide this experience to lucky children from the community and surrounding areas.

The following links will take you to pictures from the event (with a few samples below):

Thanks again and see you at next year’s 10th anniversary event on June 16! 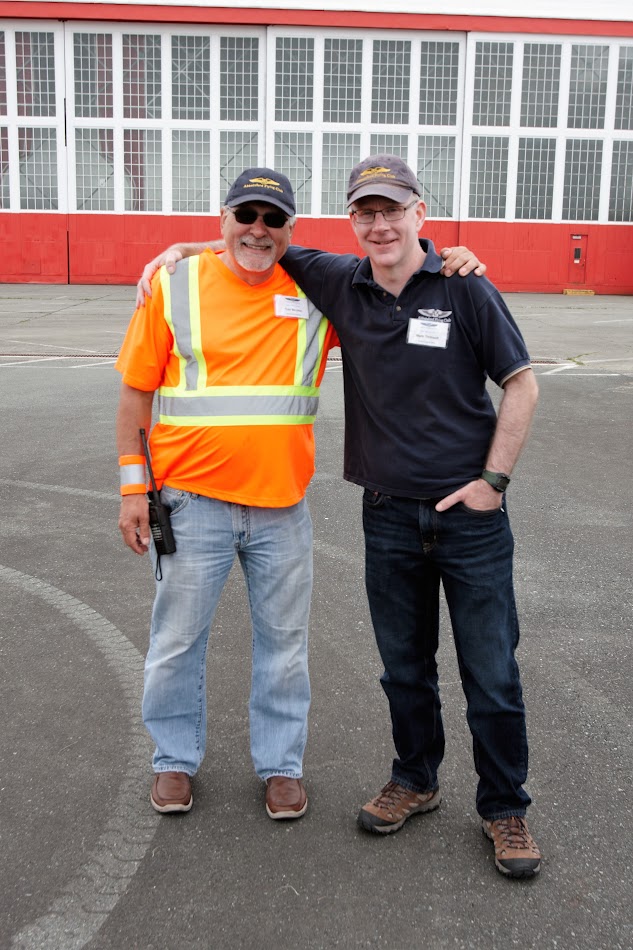 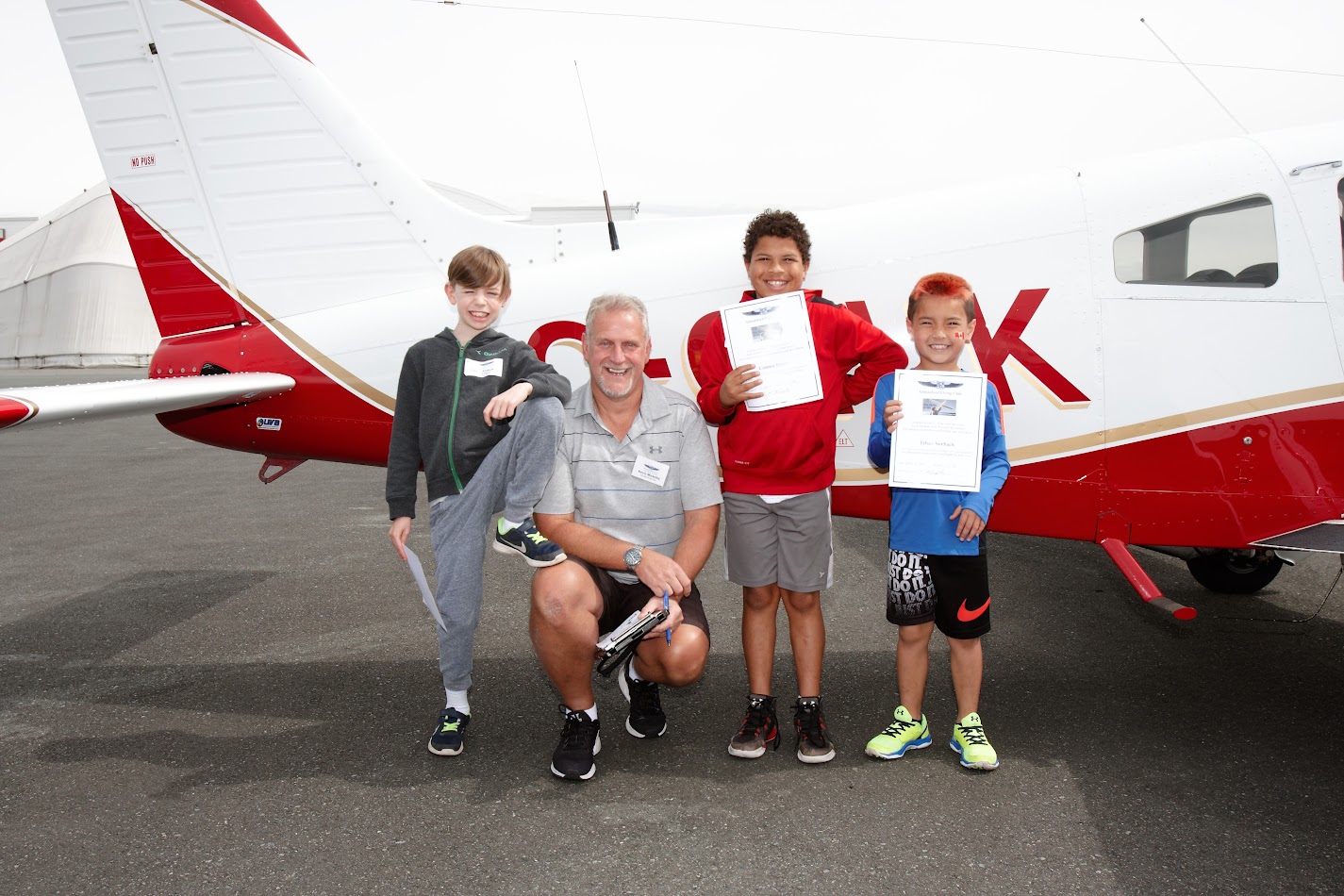 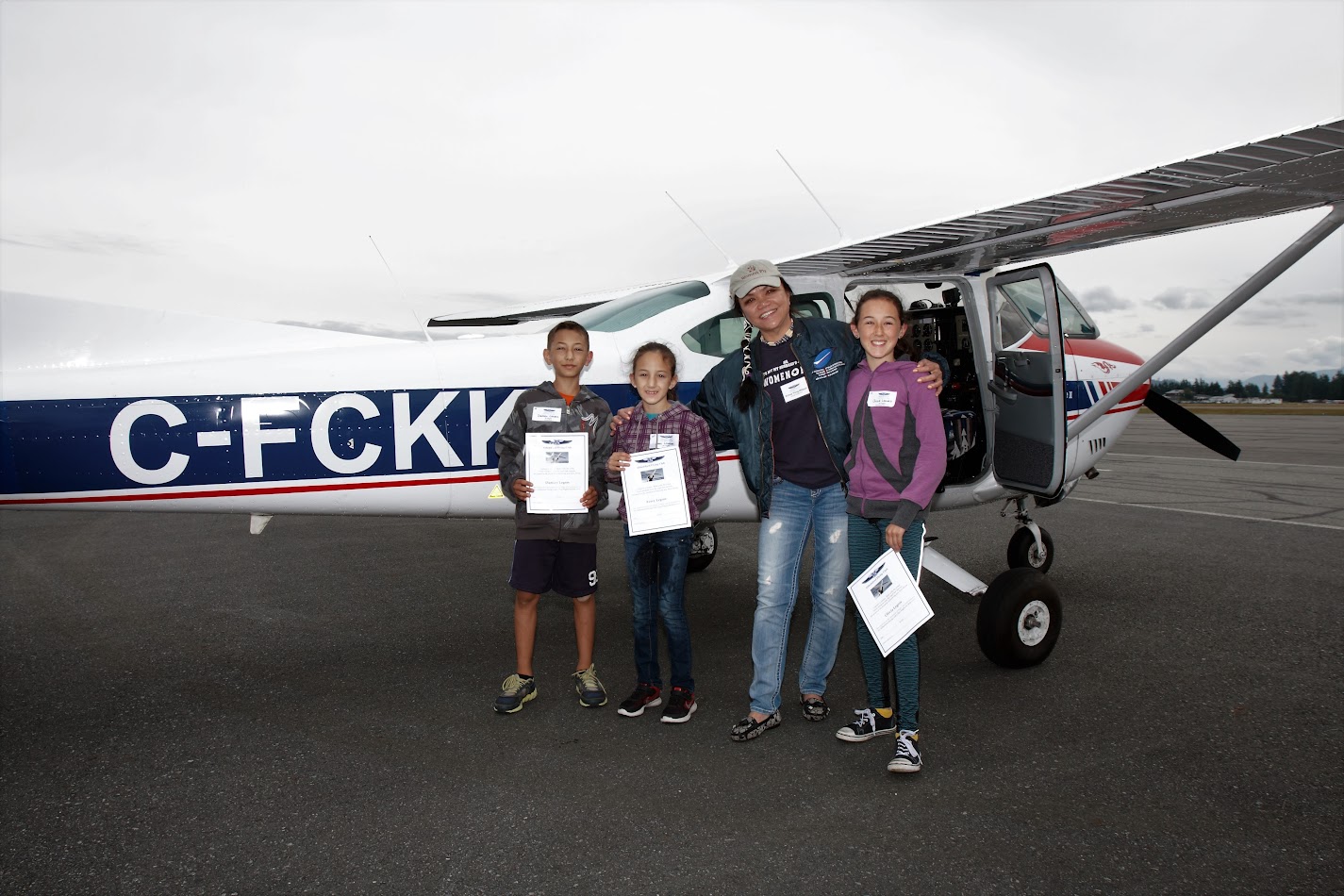 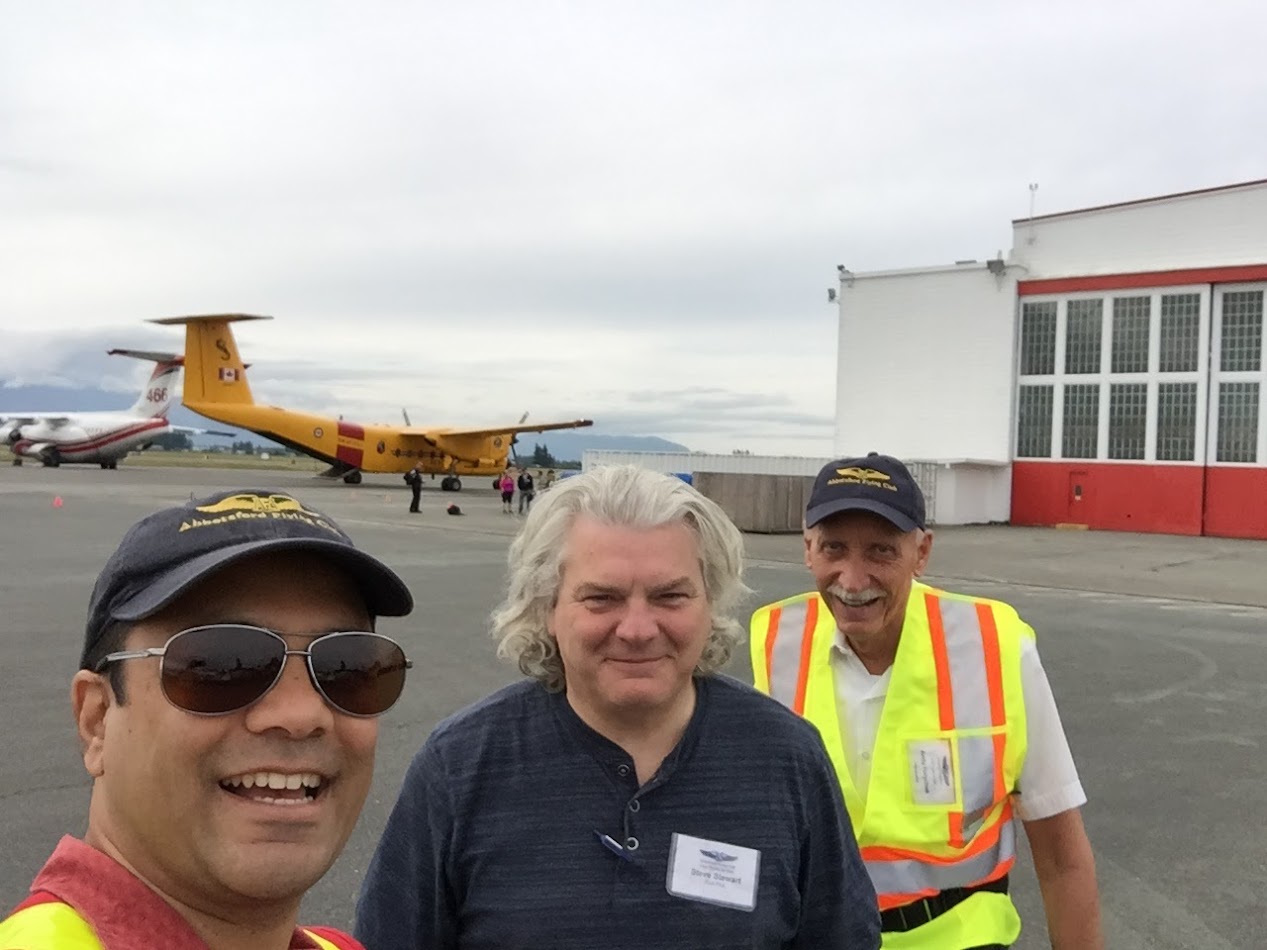 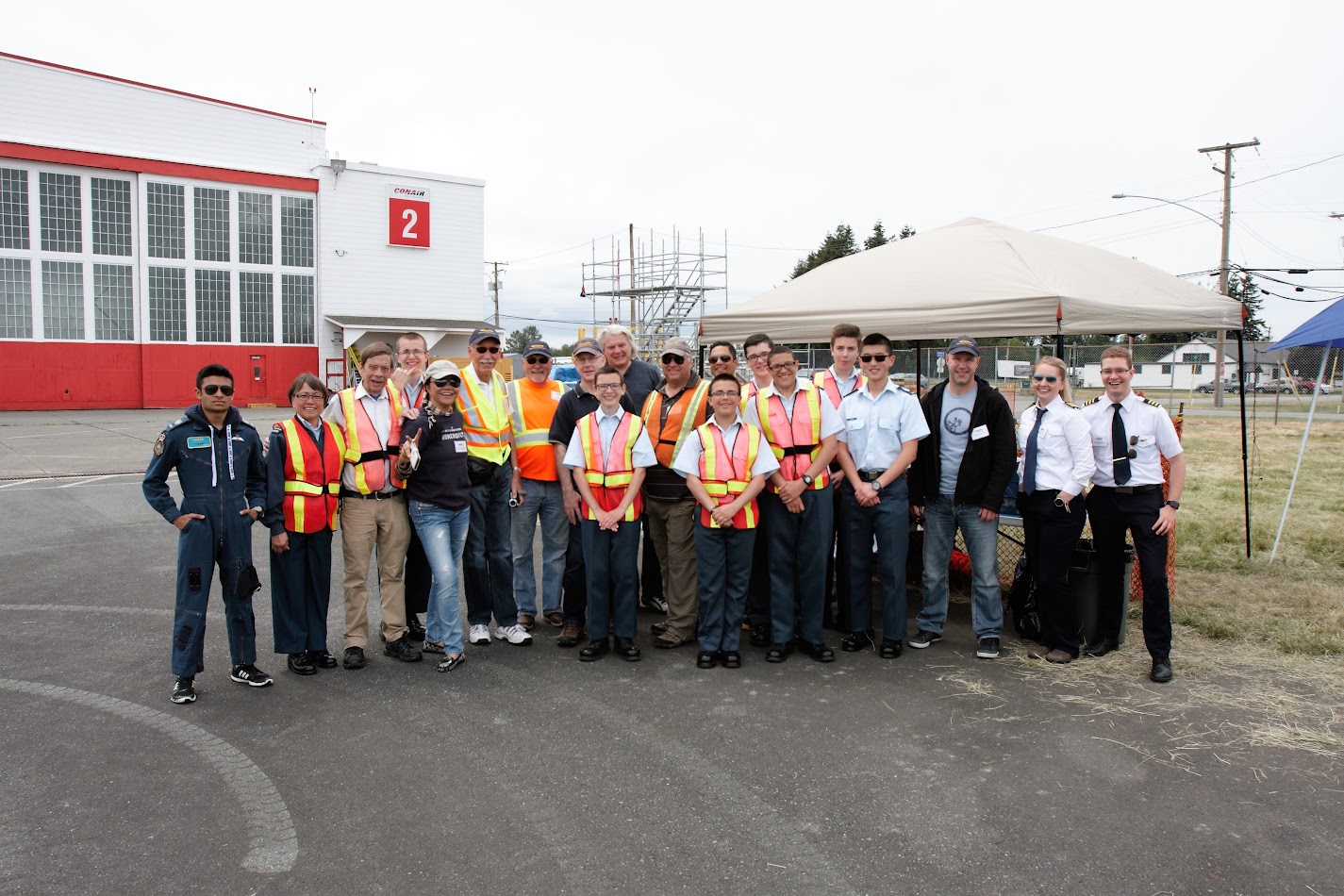 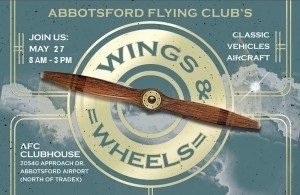 We had our best set-up ever for the 2016 Wings ‘n’ Wheels event. Steve and I worked through Friday on it in mostly good weather to rope off and shovel gravel. Used the pile that Gerry Crapo supplied and filled most of the holes and ruts in the grass area. A considerable improvement.

Tom, Keith and others had also improved the gate cross over area so much better than previous. I found another hole in the grass since so still needs some more work, but generally is much better. Also we leveled up the new band platform that Keith built.

Sunday weather was even better than Friday’s. Sunny. Saturday, well not so much. It rained solid all day. Our brunch crew lead Bob Bryan along with Murray and Leanne adapted to Airshow mode using the meeting room for brunch with Courtney set at the corner.

Hi Ed
I just want to say thanks to you and the AFC crew for
putting on a wonderful event. I know it rained and all that
stuff but it was still a great event with a fantastic brunch
and the chance to talk to old friends and meet new ones.
Joan and I had a great time.
Thanks again.
Ken&Joan Wardstrom

We had quite a number of drive in guests from the airports around us including Langley, Boundry Bay and Chilliwack. So the inside program went well

Thank you to Bob Bryan and crew for the brunch, not just cooking but all the pot scrubbing and club house clean up. There were quite a number of members working both sides of the pass through window.

One thing we have to appreciate with this type of event, is how accommodating and adaptable our large clubhouse is. It really saved our event with everyone inside including Clark and the DC3. It went well especially with the live music.

Outside arrivals were slim. A black Corvette that was awarded Best Wheels was a man from Surrey. Turns out his wife had died that week and his friends were using our event to get him out of the house. Along with the Corvette, a collection of Japanese, German and British vehicles. Chris Palmer’s Land Rover and Chris Hibbert’s Jaguar.

Zero fly-in’s on the Wings side with solid IFR conditions. However Rene created a display on his own, with the Pacer squeezed between the trees, his black VW under wing one side and replica Porsche on the the other.

Rene received Best Wings for his aviation enthusiasm and contributions to the club. It occurred to me after that if he had brought out his pocket motorcycle that he could have filled all three classes. Devon Campbell with the KitFox, later in the day Chris with the Viking along with our two aircraft.

At 1PM there was $300 in fuel draws for participants, with Randy handling the draw. Steve spoke for the club then Mayor Braun for the City and making the engraved plaque Wings ‘n’ Wheels awards.

Our luck was the wettest day in an otherwise mostly dry May, possibly the wettest day of the year. That is the way it goes with dates. Considering the event we had in our clubhouse, some success.

Thanks to Heather on arrivals, Bob LeRoux air side and to all the members that helped.

Please click HERE to be redirected to photos from the past month. Including images from Gil Vidler and DC-2 live at AFC, as well as Robbie Burns festivities!

Gerry Crapo organized the third annual Christmas lunch at the Chilliwack airport restaurant. As in previous years it was an overwhelming success. We had 35 participants enjoying soup or salad as an appetizer, followed by turkey, mashed potatoes, Brussels sprouts, carrots and meat balls. The choices for dessert were apple pie or pumpkin pie. A very good deal for less than $20.00.

After lunch owners Judy and her sister were presented a framed photograph of IUK by president Steve Stewart and Gerry Crapo. The air to air shot was taken by Debi Fitzgerald. The back of the picture was signed by all club members who attended the lunch party. Most people chose to drive in, however, IUK, GMA and Mooney VRP flew in for the event.

Click here or the picture below for more pictures from the event. 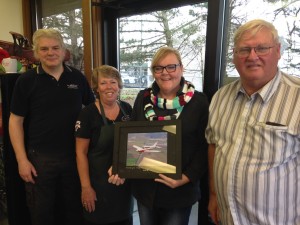